The Royal Troon Golf Club has a rich history, founded in 1878 and known as the Troon Golf Club before receiving Royal patronage in 1978. In 1942, during the war years, the Clubhouse served the Admiralty and was used as operations headquarters named HMS Gannet.

As a company, sash windows are all we do and we are proud to produce the best most authentic and true to original timber alternative sash windows in the UK.

The Club motto in Latin’s closest translation is “It is as much by skill than strength” and the club has witnessed this skill on many grand occasions having hosted nine open championships, six amateur Championships and one senior championship to date. The course record is jointly held by Tiger Woods 1997 and Greg Norman 1989 with a score of 64.

The club was to host the ninth Open Championship yet again in 2016 and although some refurbishment had been done, problems were experienced with heating and noisy air-conditioning. This caused disruption to the golfers all due to the thermal inefficiently of the windows. Many of the windows were not operational and the decision was taken to replace the windows in three-quarters of the building including the restaurant, new club bar, smoking room, gentlemen’s changing rooms and three impressive windows in the Captains Locker Room. The window construction was behind the original stone mullions. It was a match made in heaven when a good customer, also a club member, recommended Masterframe to the club members and the Architects, Lawrence McPherson Associates as the potential window manufacturer to supply J C Morton Homes who had won the contract. The Group Chairman of Masterframe, Alan Burgess has this to say “As a company, sash windows are all we do and we are proud to produce the best most authentic and true to original timber alternative sash windows in the UK. The Royal Troon Golf Club’s ethos mirrors our traditional values and dedication to excellence. Our aim was to recommend the very best solution to match the architecture of the club building, with the most up to date features that we could manufacture.” The project commenced when the architect specified the windows using information from the Masterframe website. Although the initial specification proved impossible to manufacture, samples were produced incorporating parts of the original specification and some recommendations from Masterframe including authentic timber effect butt jointing and dual foils.

Our aim was to recommend the very best solution to match the architecture of the club building, with the most up to date features that we could manufacture 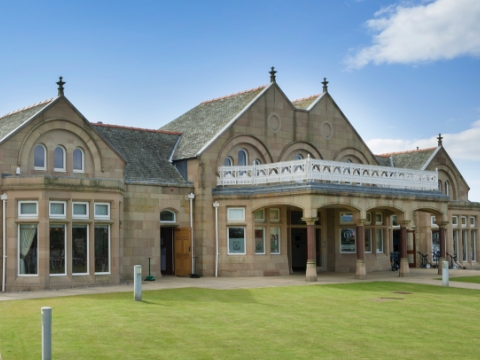 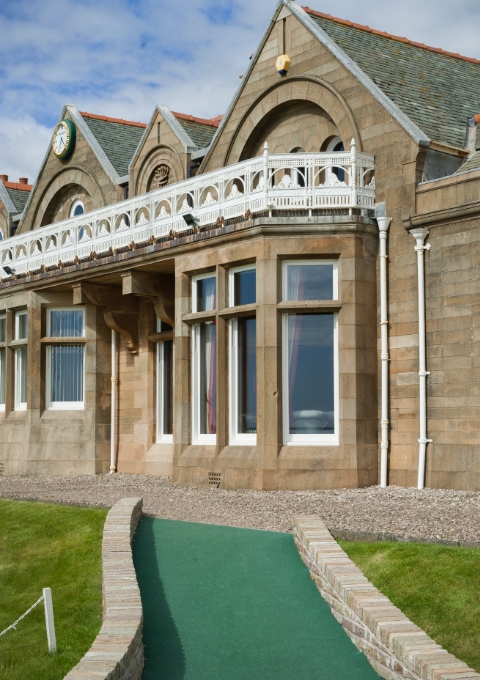 The clubhouse is not a listed building and the South Ayrshire Council found favour with the Vintage window samples because the windows protected the existing building fabric, enhanced the look and were virtually indistinguishable from the originals, fitted behind rebates with no visible sightlines. The final specification was approved; it was to be the Vintage window with fully butt-jointed frames and sashes complete with laminated Glass. The windows would be complemented by the best and most exclusive furniture. Dual foiling was used in different combinations to suit the character of the various rooms with white wood foil externally. With the use of these foils, it was important to pay special attention to detail so that when a window had wooden foil inside and white foil on the outside, from each view the entire window appeared the same colour. This entailed a specialised spray procedure to ensure continuity.

Upstairs, there are two unusual and exclusive London style sash windows being square on the inside with a full arch on the outside. There are even some very large windows that, due to the glass specification cannot be operational but still match the operational windows. Once the windows were manufactured it was down to Iain Rorison, an experienced artisan in the art of ornamental joinery and John Morton the owner of J C Morton homes to install the windows. The timber alternative PVC-U windows are more serviceable than the originals, improving ventilation especially in the changing rooms and not requiring annual maintenance in spite of being within 200 yards of the sea. Chris Moran, House Governor of the club commented: “The windows are universally acknowledged as being first-class and a number of advocates of wood have stated they were wrong and have indicated that the quality of the windows and the fitting has been an outstanding success.” The tasteful and elegant internal refurbishment, coupled with the new sash windows reflects the club’s original character and traditions like never before. Royal Troon looked its best, at the top of its game when it welcomed the world’s top golfers at the Open in 2016.

Would you like to know more about this project? Call John Samuels on 0800 0484 671 or complete a form here.
Back to case studies